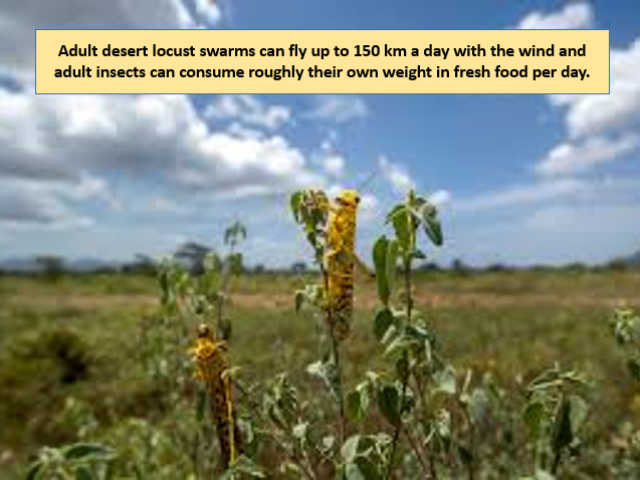 Adult desert locust swarms can fly up to 150 km a day with the wind and adult insects can consume roughly their own weight in fresh food per day.

Hack:Modi government has once again cracked down down on corruption by compulsorily retiring 15 senior officers of Central Board of Indirect Taxes & Customs, as per top finance ministry sourcesThe move is aimed at giving exemplary punishment to errant officers and improve the experience of people, signalling the government's zero tolerance to corruptionPreviously on June 10, the Modi government had compulsorily retired 12 top government officials involved in multiple cases ranging from disproportionate assets to corruption charges

Merely eight days after forcing 12 top government officials mainly belonging to the income tax department to 'compulsorily retire' under rule 56 J of the General Financial Rules (GFRs), the Modi government, on Tuesday, has once again cracked down down on corruption by compulsorily retiring 15 senior officers of Central Board of Indirect Taxes & Customs, as per top finance ministry sources.

Sources have claimed that most of the senior officers with cases related to bribery, disproportionate assets, wrongful value declaration of goods filed against them. The move is aimed at giving exemplary punishment to errant officers and improve the experience of people, signalling the government's zero tolerance to corruption. Most of them are in the rank of Commissioner, Additional Commissioner, Deputy Commissioner ranging from the 1984 batch to 2014 batch of government services.

Here is the list of the ousted officials along with their charges:

In 1996, CBI registered a case against him alleging that he had entered into a criminal conspiracy as a motive for showing favour to one M/s Jagjivan Coop. House Building Society Ltd., Delhi. He was booked for accepting bribes in 2012 to cover up a case of duty evasion, for which he was suspended and subsequently arrested. Other charges against him include harassment and extortion, huge stock transactions done upto Rs.2.5 Crore by his wife, non-vacation of government flat and accepting bribe by using informer's information on duty evasion.

Dikshit who is currently under suspension has two CBI cases filed against him - In 2015, he allowed fraudulent drawback of Rs.74.50 Crores, and a Disproportionate Assets case to the tune of 78.46 % in excess of known sources of income.

Chand was charged in 2018 under a trap case of Rs.1.5 lakh and for systematic collection of bribes

CBI has filed two cases against him - a trap case of Rs.5 lakhs, and a Disproportionate Assets case to the tune of Rs.2.24 Crores.

Singh who is currently under suspension was booked by the DRI for wrongly declaring the value of 14 consignments of rough diamonds of low and inferior quality. While the actual value of the consignments was Rs.1.2 Crore, Singh declared Rs. 156 Crores as its value. He was also involved in money laundering f Rs 154.88 Crores.

CBI has filed two cases against Mahida - a Trap case of Rs 20 Lakh and a Disproportionate Assets case to the tune of Rs 4.52 Crores.

Apart from a Disproportionate Assets case, Agarwal faces major penalty proceedings for allowing export of goods despite knowledge of misdeclaration of the weight of consignments. He had also threatened the exporter's representative with arrest and demanded a bribe of Rs 6 Lakh. The DRI is investigating his role in a narcotics drug case in Jaipur.

CBI has filed a Disproportionate Assets case to the tune of Rs.1.55 Crore and cash amounting to Rs.95 lakh have been recovered by the authorities.

Kumar, who is under suspension has three cases filed by the CBI against him - In 2015, he allowed fraudulent drawback of Rs 74.5 Crores, a Disproportionate Assets case to the tune of Rs. 56.82 lakhs and Rs.92.95 lakh worth cash have been recovered from his lockers.

Pabana, who is also under suspension, was arrested by the DRI for an attempt to abet export of foreign currency worth Rs 2.20 Crores.

In 2013, CBI had filed bribery charges against him for accepting Rs 10 Lakh from M/s Universal Agency, Kolkata to permit transportation of fertilizers and other materials to Nepal.

Sanga was charged for clearance of the two consignments of over-invoiced goods without making efforts to ascertain the correct Market Value of the goods. He was also charged with a DRI case of import of misdeclared electronic goods.

Sekar was involved in paying Rs.13 lakhs to a middleman for admission of his son in Anna University. he was also associated with the Agents seeking necessary emigration clearance for various candidates for which he received Rs 15 to 20 lakh per month. While the CBI has filed a case for the above charges, the investigation agency also recovered Rs 1.76 Cr. in cash from Sekar's recruiting agents. A Disproportionate Assets case to the tune of Rs. 2.08 Crore has also been filed.

CBI has filed a case against Aswal for accepting a bribe of Rs. 10 lakhs.

He was charged as the mastermind and investor in smuggling of Red Sanders in two cases and has been imposed with a penalty of Rs 2.05 Crore.

Previously on June 10, the Modi government had compulsorily retired 12 top government officials who were either charged or accused with multiple cases ranging from disproportionate assets, tax evasions, corruption charges, sexual harassment to disciplinary proceedings to name a few charges. Most of them are in the rank of Chief Commissioners, Principal Commissioners, Commissioners of Income Tax department, according to Finance ministry sources.

is this the corruption? R u advocating or giving chances to the RSS module much more I exoected out from Modi govt.

why retire, confiscate their property. put them in jail if not then change the law to prosecute them.uske pure parivar ka property jabt karlo tab use pata cvhalega